What is the reality of a viral post which has a photo of Shiva Linga is getting viral on social media? It is claimed to be the Shiva Linga in Makka Madina inside Kabba. Is it true? Let’s find out.

We all have heard a rumour at least once in our lifetime that inside of Kabba, there is a wonderful and miraculous Shiva Linga.

Before getting into the details of the viral post circulating on social media, let me tell you something about Makka, Madina and Kabba.

Something about Makka, Madina and Kabba:

Mecca or Makka is a city in Saudi Arabia. It is the holiest city in Islam and is the birthplace of the Islamic Prophet Muhammad.

Second-holiest city in Islam after Makka is Medina. It is also located in Saudi Arabia. At the centre of the city is al-Masjid an-Nabawi (“the Prophet’s Mosque”) which is the burial place of the Islamic prophet Muhammad.

Kabba is a cubical structure made of granite. It is at the centre of the most important mosque in Islam, Al-Masjid Al-Ḥarām (“The Sacred Mosque”) in Makka. Muslims circumambulate around Kabba seven times in counter-clockwise direction.

According to one of the five pillars of Islam, Muslims, who are able to do so, should perform Hajj, at least once in their lifetime. Hajj is an annual Islamic pilgrimage to Makka.

The reality of Viral Post of Shiva Linga in Makka Madina inside Kabba:

This is the post that is getting viral on social media. 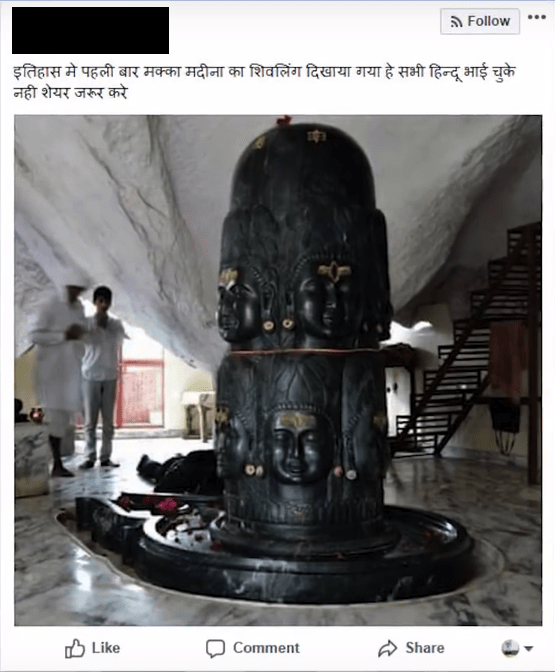 In the above post, all the Hindus are requested to share this post as much as they can. It also claims to be the first proof of Shiva Linga inside the Kabba.

People sharing it claims that the Shiva Linga has been photographed for the first time.

In this post, there is a grand Shiva Linga with many faces of Lord Shiva engraved on it.

Two people in white clothes are standing on the left of the Shiva Linga. And on the right, there is a staircase. There is a person in obeisance in front of Shiva Linga.

MUST READ: Why Lord Shiva wears a snake around his neck?

Let me tell you that this post is fake.

The photo which is shown in the post is actually of 12 faced Shiva Linga of the cave temple at Pandu Hill, Viratnagar, Jaipur, Rajasthan.

As per the Mahabharata, Pandavas spent their 13th year of exile, Agyat Vas (incognito) in the Virata Kingdom or modern day Viratnagar.

This place was ruled by King Virata, hence the name Viratnagar. And since Pandavas spent one year here, the hills are known as Pandu hills.

In one of the caves in Pandu hills, this Shivalingam is situated. It is made up of black stone and has 12 faces of Lord Shiva engraved on it.

In reality, this photo is taken from an article published on mapsofindia about the Buddhist Art and Mughal Architecture in Jaipur.

MUST READ: Why Pandavas went to Naraka & Kauravas to Swarga in Mahabharata?

You can also see the 3D model of the interior of Kabba on Google Streetview.

Interesting fact about Kabba is that it has been in existence way before the birth of Islam. In the Pre-Islamic Era, it was a holy site for the various Bedouin tribes of the area.

At that time, various sculptures and paintings of pagan deities were held inside the Kaaba.

So now you know that the post claiming to be the proof of Shiva Linga in Makka Madina is fake. Please share this article on Whatsapp Groups and Facebook to spread the awareness about the fake post.