Mahabharata is the world’s longest poem known to mankind. It is an epic narrative of the Kurukshetra war and the fates of the Pandavas and the Kauravas princes. 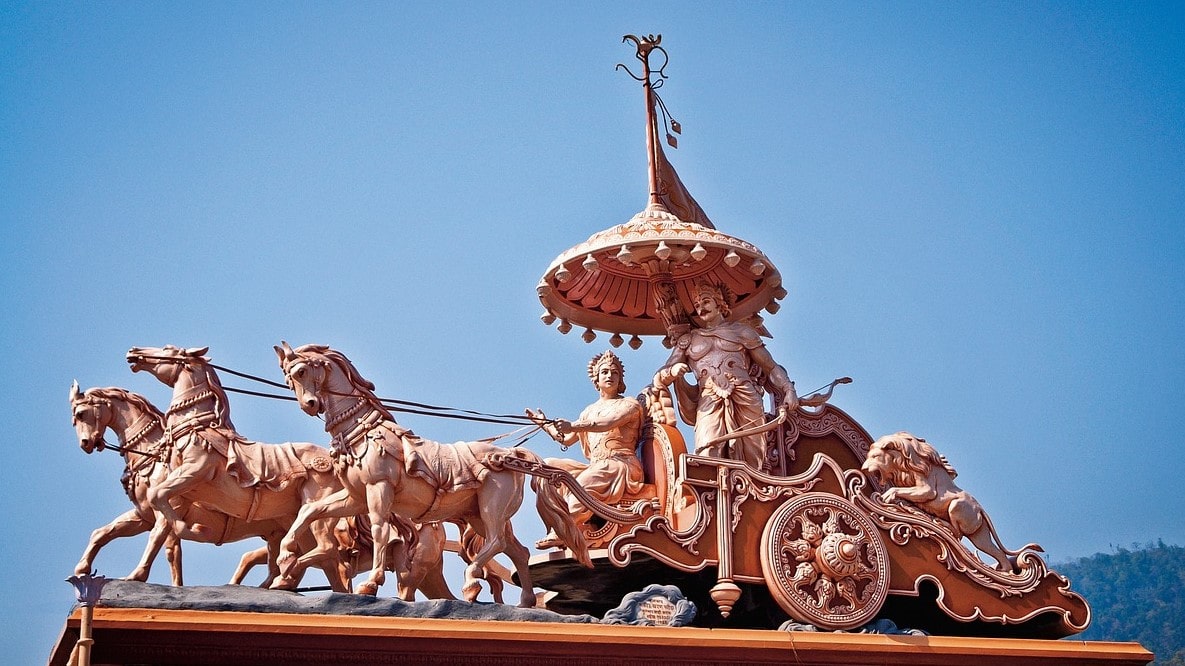 But apart from being a war epic, it contains deep philosophy about almost every aspect of worldly life. It goes beyond what is good karma or bad karma.

As at the time of doing karma, nobody could ever know whether they are doing good or bad. It explains the complexity of karma.

This aspect of life and karma is beautifully explained in this ever confusing question that why Kauravas instead of their bad deeds get a place in Swarga (heaven) and Pandavas went to Naraka (hell).

After the war ended, the Kauravas lose, and the Pandavas win and rule over Hastinapur for over 36 years.

After that, they advance to Vanaprastha ashram, in order to renounce the world and begin their journey toward Swarga (heaven).

Vanaprastha literally means “retiring into a forest”. It is one of the four ashramas (stages) of human life according to Vedas.

It is the third of four ashramas, which starts when a person hands over household responsibilities to the next generation, takes an advisory role, and gradually withdraws from the world.

Vanaprastha stage is considered as a transition phase from a householder’s life to one with greater emphasis on Moksha (spiritual liberation).

Pandavas believed that they are excellent rulers. They followed Dharma and fulfill all their duties. So they will definitely get a place in Swarga (heaven).

As Yudhishthira said “If we have truly upheld Dharma in our lives, then our bodies will not die. We will enter the realm of the gods with this flesh.”

They started climbing the mountain whose peak is believed to be the entrance to heaven.

They were accompanied by a dog (who was actually Dharma, the god of righteous conduct). But something strange happened.

As they proceed towards the peak, one after the other the Pandavas brothers start dying.

Draupadi being the first and then Sahadeva, Nakula, Arjuna, and finally Bheem.

Yudhishthira does not turn his back once and refuses to help anyone as he told himself that “I have renounced everything“.

He thought that if he wanted to get a place in Swarga, he has to renounce everything, otherwise, he too will die.

Finally, he reached the top of the mountain, which is believed to be the entrance to the Swarga (heaven).

There he was welcomed by the Indra. Indra said, “You have been the true Dharamraj (king of dharma) by being virtuous at all times, so come to Swarga”.

(Also Read: Who is Lord Indra and why despite being King of Devas, he is not worshipped?)

Yudhishthira requested Indra to allow the dog to enter, along with him as they have been companions in the long journey. Indra refuses his demand.

Indra is very pleased with his principled stand and says, “You have once again shown integrity and deserves to enter heaven”. Yudhishthira receives a grand welcome in heaven from everyone.

But as soon as he enters heaven, he sees 100 Kauravas, including Duryodhana & Dusshasana, spreading their arms to welcome him.

He was shocked, disgusted, and gets angry and asks Indra, how the Kauravas, the adharmis get a place in heaven. They were the cause of the war.

Indra tells him the reason, that why, and how the Kauravas came to be in heaven. It was because of the Kurukshetra land itself.

It is named after the King Kuru of the Kuru clan. When King Kuru came on this land, it was known as Uttaradevi.

As per his wishes, the land will have all the 8 virtues and will be perennially holy.

He said, “Any person dying here doing his duty will be cleansed of all evil and will get the wishes to heaven.”

This way, everybody including the 100 Kauravas who died in the war, on this land will go to heaven.

This is how the Kauravas who die at Kurukshetra doing their duty as Kshatriyas (warriors) will find a place in heaven.

It explains the complexity of karma. At the time of doing karma, nobody could ever know whether they are doing good or bad.

Yudhishthira not satisfied with this explanation, enquire about his brothers and wife. Indra takes him from Swarga to Naraka, from heaven to hell, a place full of misery.

There he sees, his brothers and wife are suffering for their individual paaps (sins).

Yudhishthira feels that compared to the sins committed by the Kauravas, these are very small faults.

He becomes extremely angry about this apparent injustice and refuses to go back to heaven.

After seeing this, Devas started laughing and says to Yudhishthira: “Hadn’t you renounce everything? You didn’t even look back at your brothers when they died”.

You have given up everything including your clothes, your kingdom but not your anger and hatred towards Kauravas.

You defeated them in the war and killed them, punishing them for their misdeed, and ruled over their kingdom for 36 years. Isn’t that enough for you?

You still have not forgiven them. You are carrying your past baggage and are still attached to your negative emotions. So how can you be in heaven?

ANOTHER VERSION OF THE STORY:

Another version of the story says that the dog was none other than Yama (god of death). He took Yudhishthira to the underworld (hell) where he sees his wife and brothers.

Yama explains to him why his siblings and wife were there in hell and then takes back Yudhishthira to heaven.

He assures him that his brothers and wife will join him in heaven after they have been freed from their sins.

THIRD VERSION OF THE STORY:

There is also a third version of the story. In this version, there is no conflict between Yudhishthira and the Kauravas.

Instead in this version, Yudhishthira himself explains why his wife and four brothers died along the journey to Bheema. At last, Bheema also falls and asks why he was unable to complete the journey.

Yudhishthira answers: “because of his gluttony”. After then he and the dog reach the gate of heaven. The dog reveals himself to be the deity Dharma.

The deity Dharma then praises Yudhishthira for his virtues and Yudhishthira enters into heaven on Indra’s chariot.

Whatever the story may be, it explains an extremely important concept that unless and until you relinquish (give up) all your anger, hatred, greed, etc., you can never achieve heaven.

It is not about the physical heaven or hell. It is the state of mind. Here heaven represents peace and pleasure and hell represents suffering.

So if you want to be happy and attain peace of mind, then let go of all your anger and hatred towards others.