We will not be able to cover all the Famous Jain temples as there are a lot. If you have any suggestions, please tell us in the comment section below.

(This list is not in any kind of order, but just used to keep the list of temples organised.)

Location: It is situated in a town named Shravanabelagola in Karnataka. It is the most famous Jain pilgrimage in South India.

The statue of Gomateshwara (or Bahubali) situated here is one of the five monolithic (carved out of single rock) statues of Bahubali in Karnataka, India.

It is the tallest monolithic statue of Bahubali in the world with a height of around 57 feet (or 17.3 meters). The other four statues are located in Karkala (42 feet), Dharmasthala (39 feet), Venur (35 feet) and Gommatagiri (20 feet).

On August 5, 2007, it ranked at the top of the list of seven wonders of India with having 49% of total votes in its favour.

It is one of the most famous Jain temples in India. Here, a special event or festival named “Mahamastakabhisheka” is held once in 12 years. Recently this event is held in February 2018.

During this festival, abhisheka of the statue is performed by washing it with gallons of water, milk, honey and eight different types of sandal paste.

Location: Dilwara Temples are located around 3 kilometres away from Mount Abu in Rajasthan.

There are five Jain temples here, with each one having its unique identity. Each one is named after the small village in which it is located. These are:

Many people considered them the most beautiful Jain temples around the world. These are a great example of the architectural perfection of ancient times. The detailing is just scintillating and marvellous.

Location: Palitana Jain temples are located on the Shatrunjaya hills in the city of Palitana in Bhavnagar district, Gujarat, India.

Along with Shikharji in Jharkhand, the two sites are considered the holiest of all pilgrimages places by Jain community.

Palitana temple complex consists of around 863 marble carved temples spread mostly in the cluster of nine.

The main temple is dedicated to Adinatha or Rishabhanatha, the first Tirthankara.

It is also believed that 23 out of 24 Tirthankara (excluding Neminatha) have sanctified the hills by their visits. Shikharji is also known as Sammed Shikharji. It is the holiest tirtha (pilgrimage site) for the Jains.

It is believed to be the place where 20 out of 24 Tirthankaras along with many other monks achieved Moksha (liberation).

The trek through the Parasnath Hillock that spans over 27 Kms (one way) is once in a lifetime experience and is unforgettable.

It is dedicated to Adinatha or Rishabhanatha, the first Tirthankara in Jainism. The temple has many exquisite features. There is also a carving of diety Parshvanatha (23rd Tirthankara) with 108 heads of snakes and numerous tails. One cannot find the end of the tails. 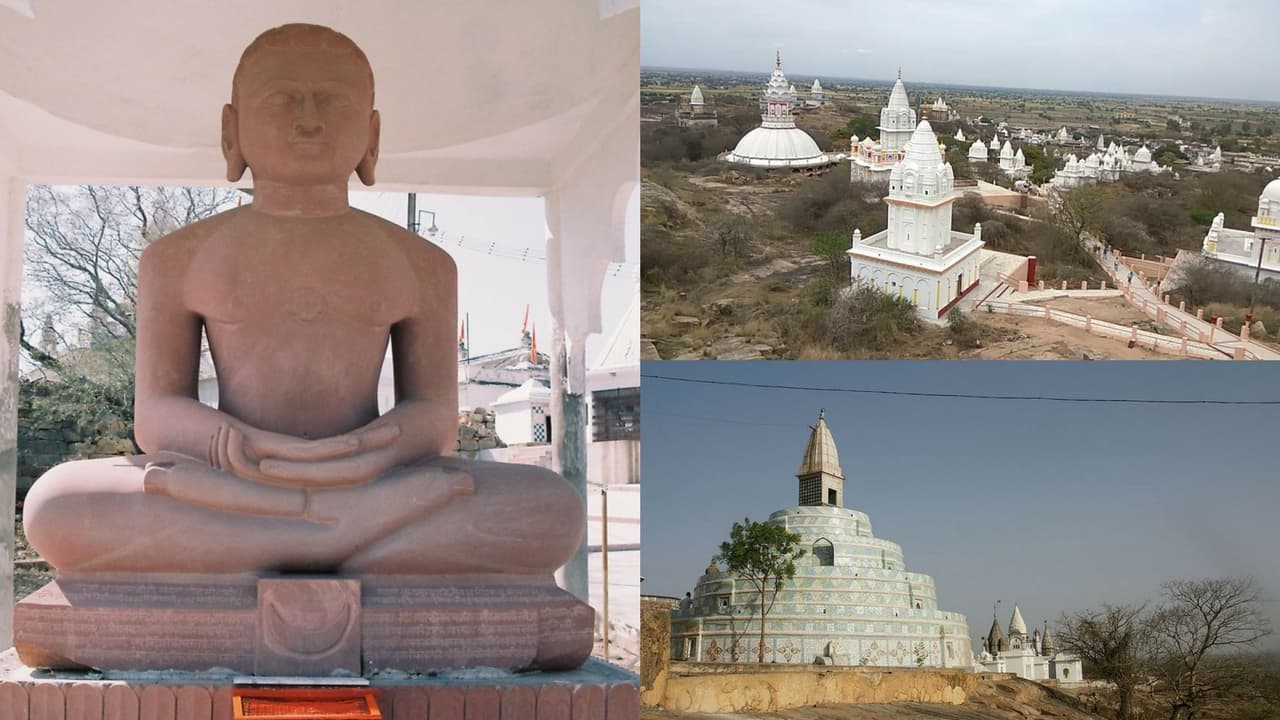 Location: Sonagiri Jain Temples are 60 km away from Gwalior in Madhya Pradesh.

The main attraction of this temple is the Idol of Chandraprabhu (8th Tirthankara) which is 11 feet high.

It is spread over 132 acres. There are 77 Jain temples with Temple No. 57 is the main temple where the idol is Lord Chandraprabhu is established. 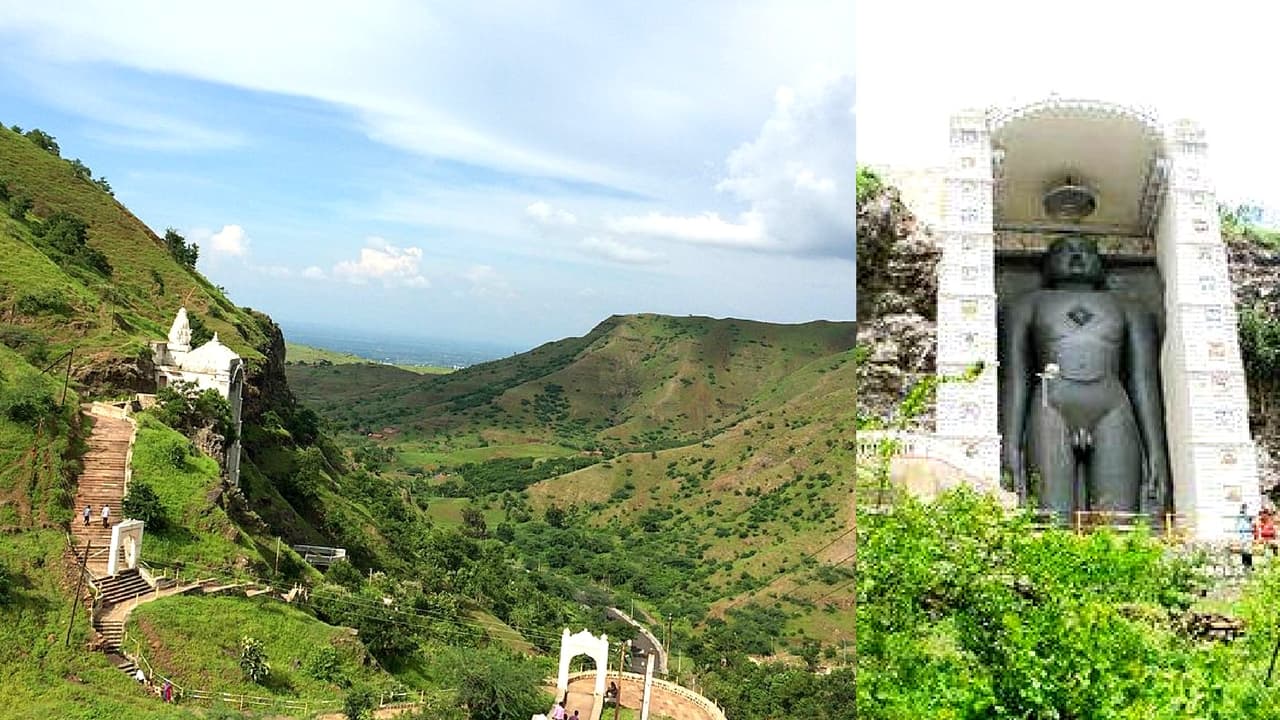 Location: Bawangaja is located in Barwani district in Madhya Pradesh.

It is famous for the largest monolithic statue of Rishabhanatha / Adinatha (1st Jain Tirthankara) which is 84 feet (26 m) high.

Also, the area has 11 Jain temples apart from the statue. 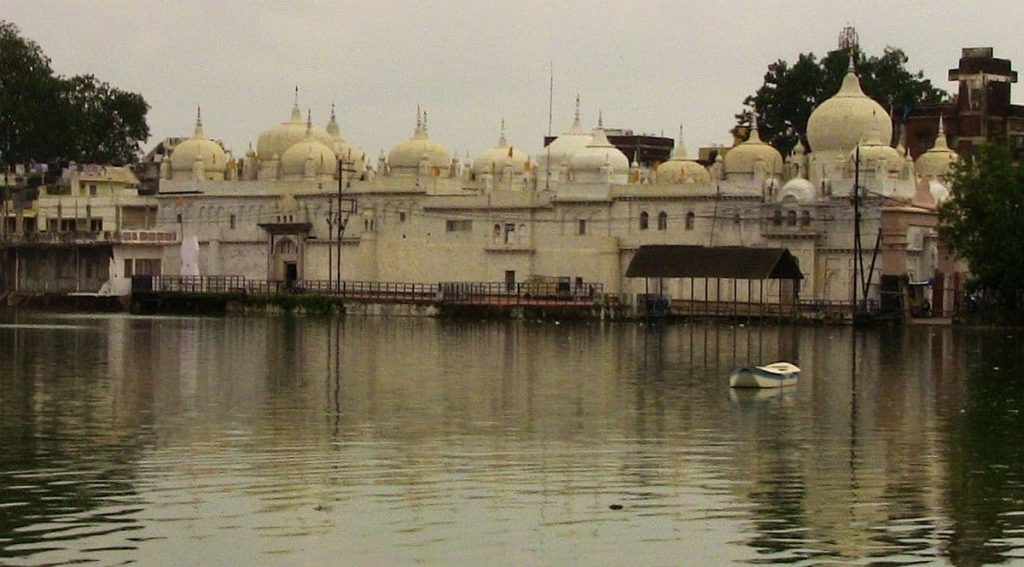 It is one of the oldest Jain temples in India dated back to 1686 CE.

Location: It is situated in Jabalpur, Madhya Pradesh.

Visually the temple looks like a fortress with many shikharas. It is the largest independent Jain temple in India as it has 22 shrines.

Also, it is the only temple in India where Goddess Padmavati is worshipped. It is a UNESCO World Heritage Site. There are total 25 temples in the complex including both Hindu and Jain temples. 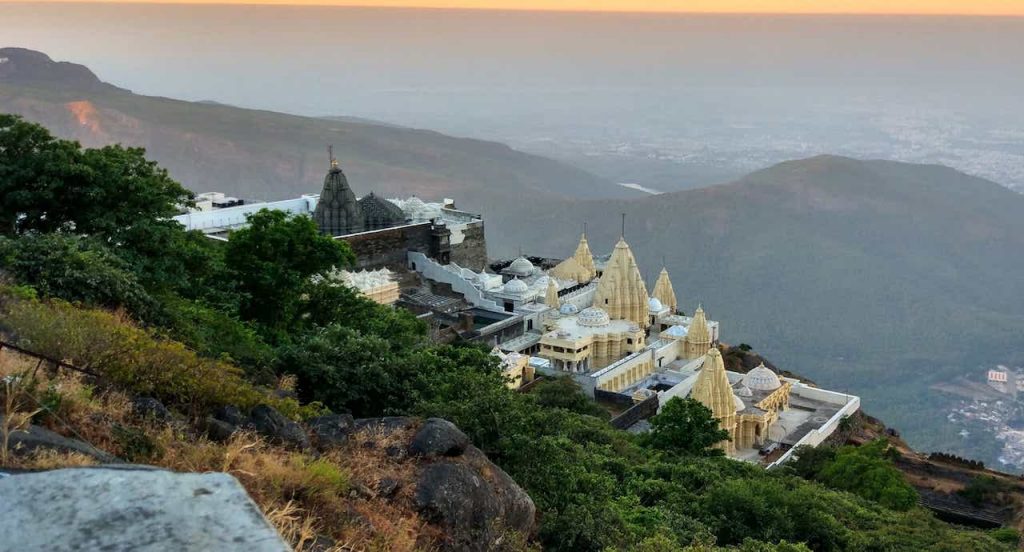 Location: These temples are located in Girnar mountains in the Junagadh District, Gujarat, India

These temples are sacred for both sects of Jainism i.e. Digambaras and Svetambaras.

The main temple is dedicated to Lord Neminatha (22nd Tirthankara). It is believed that he attained Keval Gyan and Nirvana here.

There are a total of five Tonks on Girnar Hill where the fifth tonk is of Lord Neminath’s footprints.

There are about 16 Jain temples in total with the Neminath Temple being the largest among all. 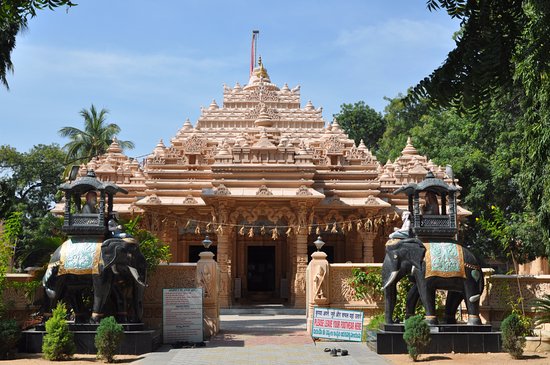 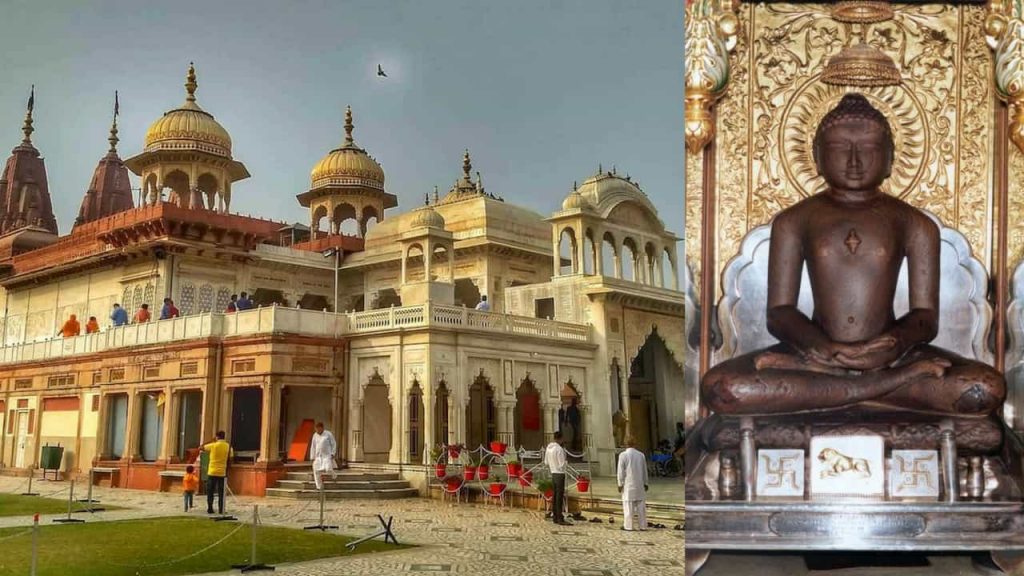 MUST READ: Why Mahavir Jayanti is celebrated? Mahavir Janma Kalyanak 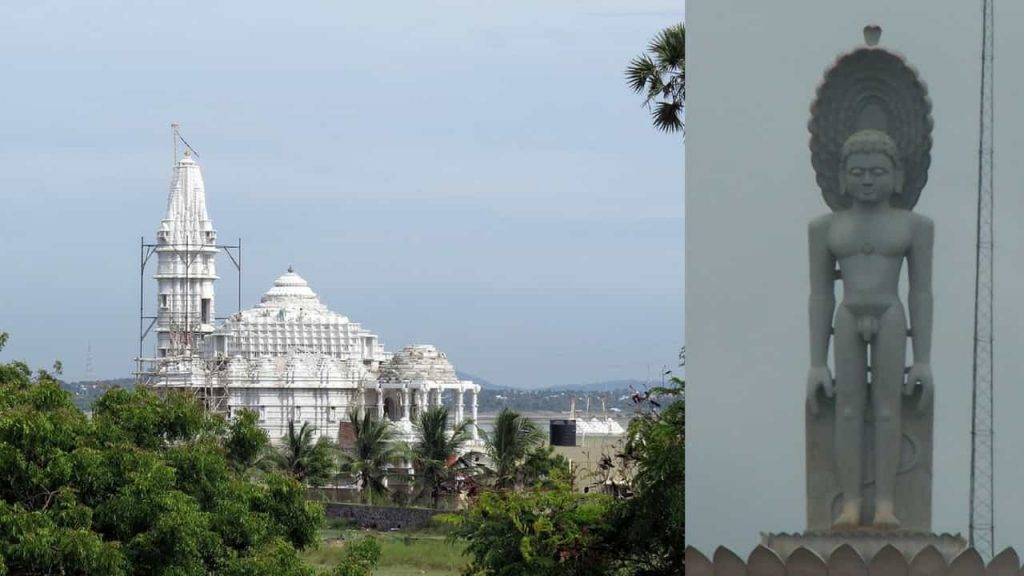 Location: It is located in Varur village, Hubli city, Karnataka. 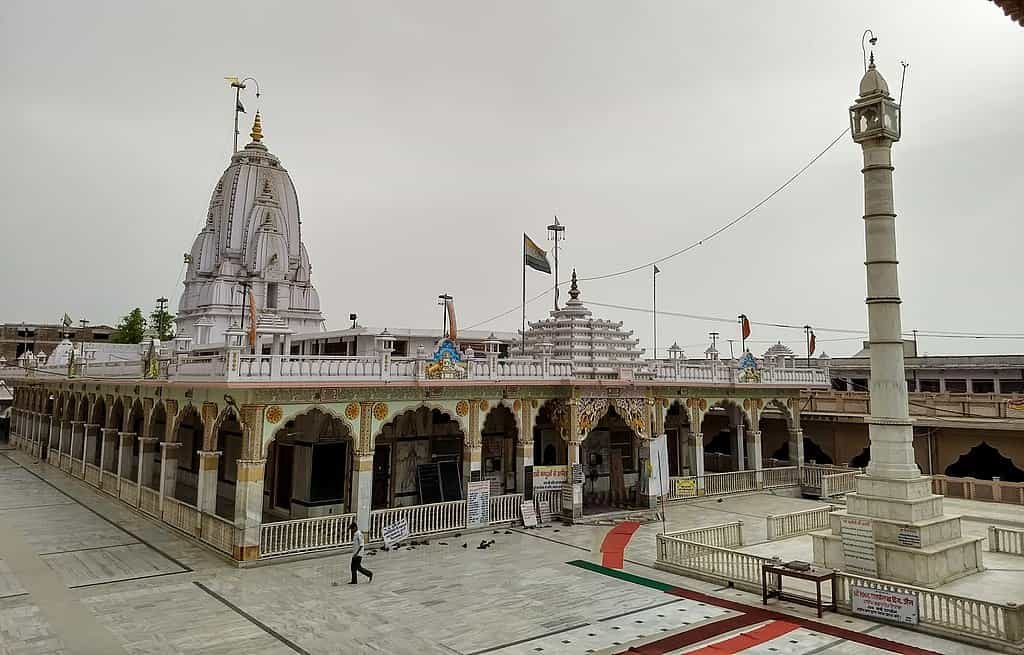 Location: It is located in Tijara town, Alwar district, Rajasthan. Location: It is located in the Mattancherry town of Kochi in Kerala, India. Location: Ellora caves are 29 Kilometres away from Aurangabad in Maharashtra, India. Location: It is located in Chandni Chowk, Delhi, India Location: It is located in Pawapuri, Nalanda district, Bihar, India. 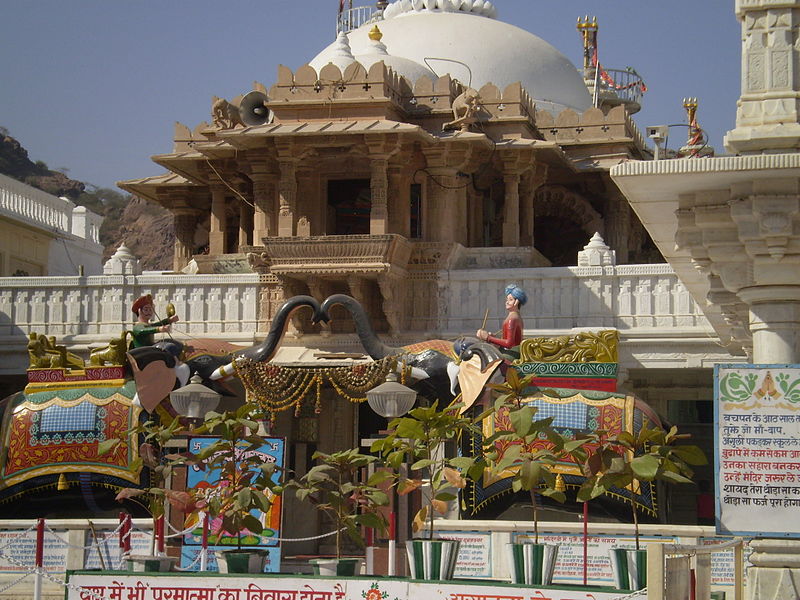 Location: It is located in Karkala, Karnataka, India. Location: It is located in Moodabidri, Karnataka, India.

MUST READ: Difference between Svetambara and Digambara in Jainism
Jain 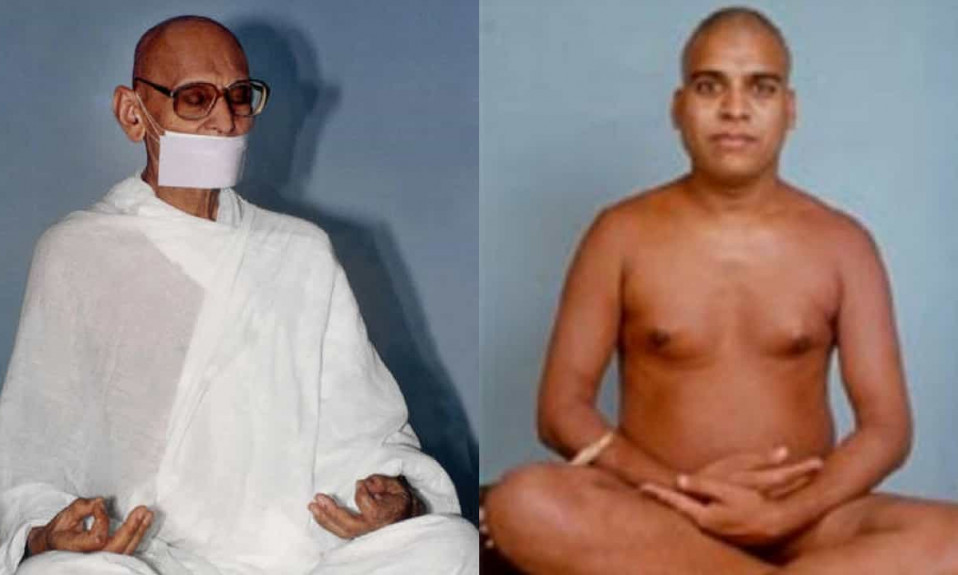 Difference between Svetambara and Digambara in Jainism Why Jains are vegetarians? Why Jains do not eat root vegetables?