Birth of Pandavas and Kauravas is not natural? How Gandhari gave birth to 100 Kauravas at once? Is it possible? How Kunti and Madri gave birth to five Pandavas in the jungle without Pandu (husband)? Why Kunti has only 3 sons, Yudhishthira, Bheema & Arjuna and Madri have only 2 sons, Nakula and Sahadeva?

Let’s answer all these questions.

(1) How Gandhari becomes able to give birth to 100 children?

Before discussing the birth of Kauravas, let’s see how Gandhari becomes able to give birth to 100 children.

As stated in the “Sambhava Parva“, Gandhari received a boon by worshipping Lord Shiva that she would become the mother of 100 sons. That’s how she can give birth to 100 Kauravas. 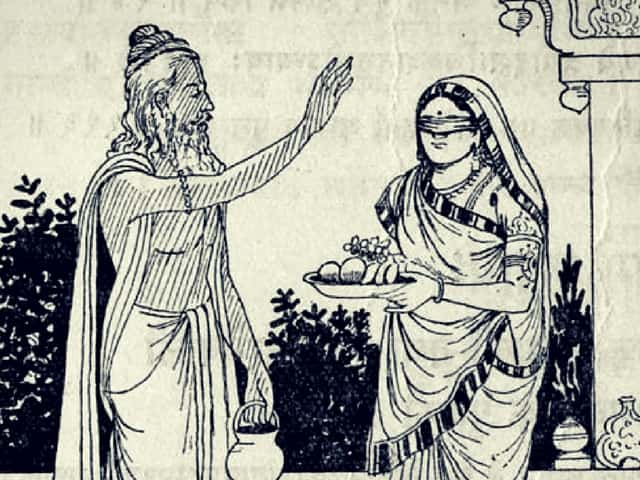 However, later in the “Sambhava Parva“, it is said that it is not Shiva but Vyasa from whom Gandhari received a boon of giving birth to 100 sons like her husband.

It does not matter, who gave her the boon. What matters is that she received a boon of having 100 sons. Now let’s see, how she gave birth to those 100 sons.

Gandhari gets jealous of Kunti:

After receiving the boon of having 100 sons, she was conceived by Dhritarashtra. She bore the weight in her womb for over 2 years without being delivered. In the meantime, a son was born to Kunti (wife of Pandu).

She got jealous that Kunti had first given birth to a son (Yudhishthira) who is as radiant as the morning sun.

After not delivering for more than 2 years, she got restless and struck her womb with great force in grief (शोक). Due to this a hard mass of flesh like an iron ball came out of her in place of 100 sons.

When Vyasa learned about it, he quickly came to her to see the mass of flesh. She told her that instead of 100 sons, a hard mass of flesh came out of her. And the boon that he gave her is hollow and useless.

Hearing this, Vyasa said that,

My words can never be futile. I have never spoken an untruth even in jest, why then my words are futile!

Birth of 100 sons and 1 daughter to Gandhari:

She asked Gandhari to prepare 100 jars filled with ghee. He told her to sprinkle water on that mass of flesh. After then he divided it into 100 parts, each about the size of a thumb. 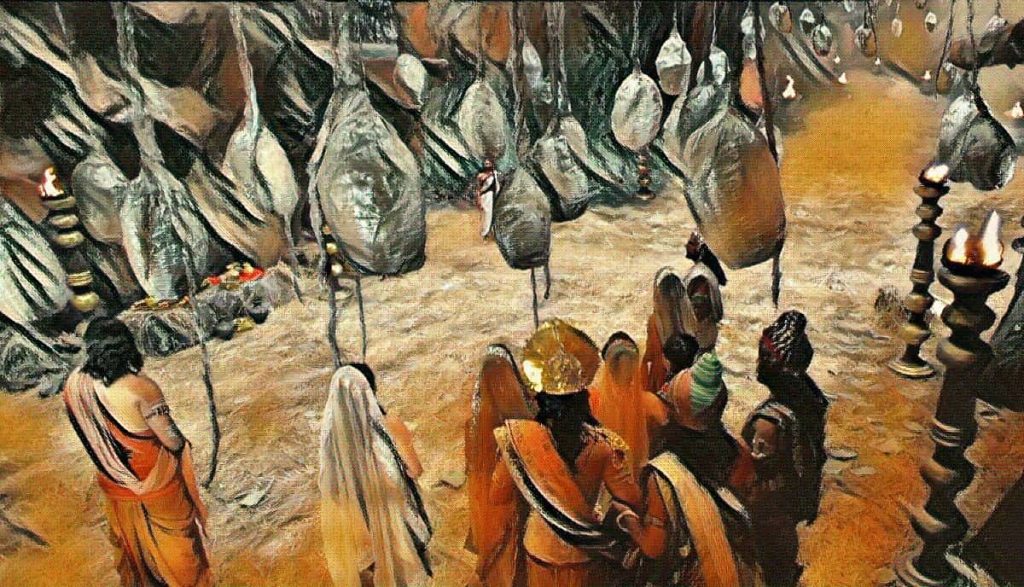 These parts are placed into the jars filled with ghee. They are kept in a secret spot and are carefully monitored.

In the meantime, a desire of having a daughter apart from 100 sons arises in the mind of Gandhari. She told Vyasa that she also wanted a daughter. Then Vyasa divided that mass of flesh into 101 parts instead of 100 and placed these into the jars.

Vyasa told Gandhari to strictly open the covers of the jars only after complete two years. After two years, Duryodhana, the first child of Gandhari was born from one of the jars. And within a month, 100 sons and a daughter of Gandhari and Dhritarashtra were born.

Below are the names of 100 Kauravas in order of their birth: 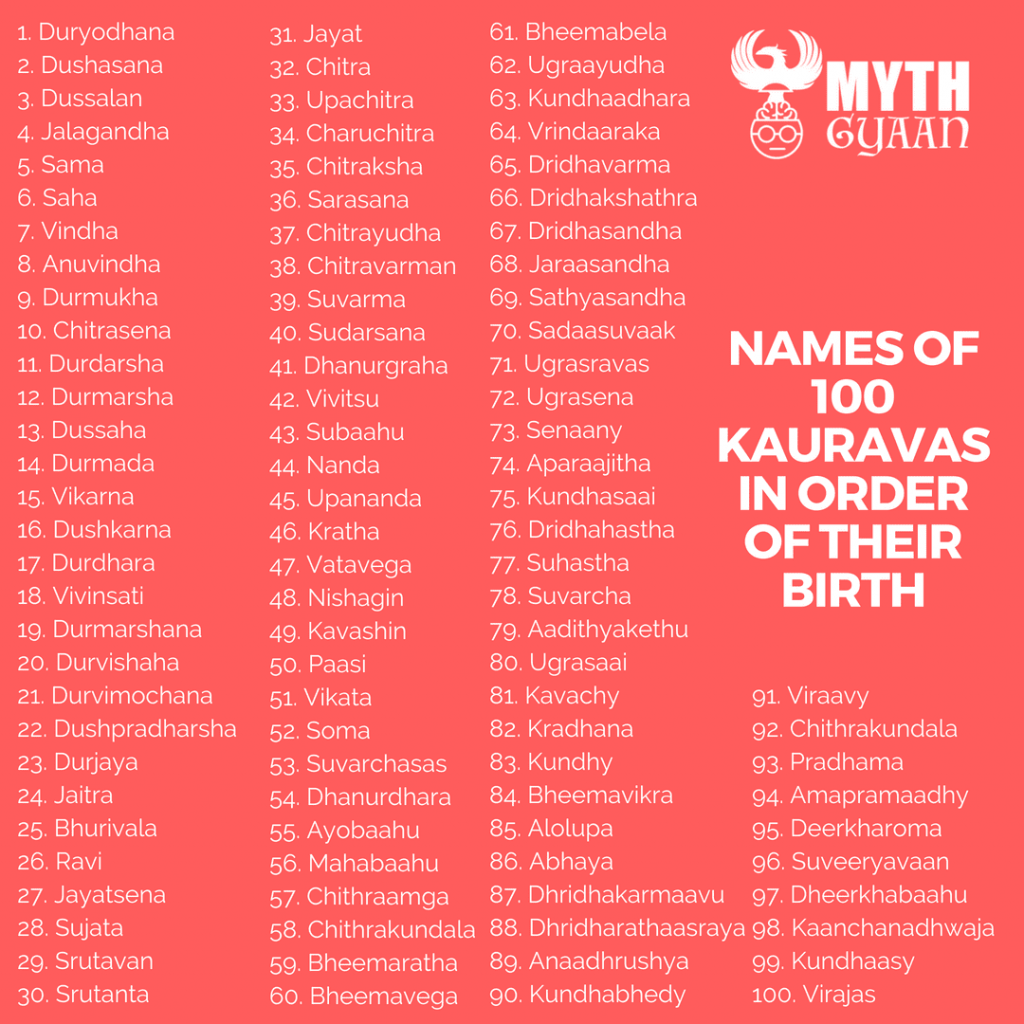 Now let us discuss the birth of Pandavas. Pandu has two wives, Kunti and Madri.

With Kunti, he has three sons, namely Yudhishthira, Bhima, and Arjuna. And with Madri, he has two sons, namely Nakula and Sahadeva. But all the five sons are not naturally born. Thus, Pandu is the earthly father of Pandavas and not the real one. Let’s see the complete story.

One day, Pandu was roaming in the forest for hunting. He saw a deer coupling with his mate. Without knowing the real identity of those deers, he shot them with his arrows. 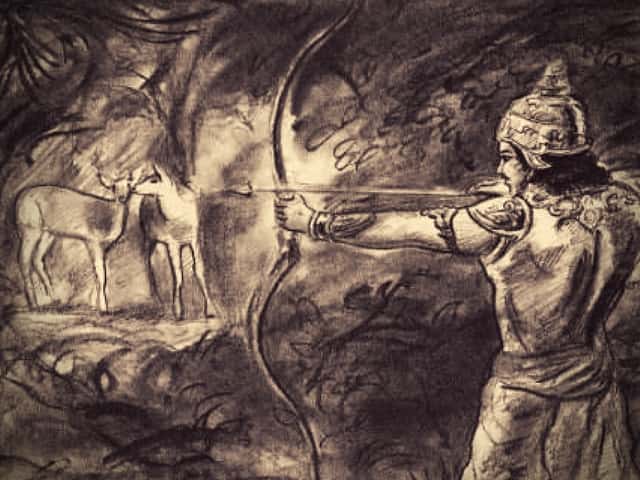 In reality, they were Rishi Kindama and his wife coupling with each other in public in the form of deers.

Rishi Kindama was enraged with Pandu, not because he pierced both of them with his arrows as he (Pandu) doesn’t know their real identity. But because he has waited until the completion of their intercourse and was not sorry for his wrongdoing.

Cruel as you have been to a couple, death shall certainly overtake you as soon as you will feel the influence of desire…

When you go to your dear one, full of desire as was the case with me, you will at that time, certainly go to the land of the dead.

Your wife, with whom you will join at your last moments will also go with you with reverence and affection to the ever unavoidable land of the dead.

It simply means that Pandu will die the moment he engaged in intercourse with any woman. Also, the woman dies with him out of love and affection.

(2) Pandu and his wives become ascetic:

After killing the deers, he was filled with grief. He was so upset that to repent his action, he decided to renounce his kingdom and live a life of an ascetic.

He told her wives, Kunti and Madri to tell his family that Pandu has retired into a forest. Hearing this, both told him that they will also perform asceticism (वैराग्य) with him.

On the new moon, a group of Rishis assembled to start a journey towards the abode (निवास) of Lord Brahma.

Seeing them, Pandu asked them, “Where you are going?”. They replied, “To the abode of Lord Brahma”.

Pandu not able to reach heaven as he is childless:

With the desire of seeing the Lord, he and his wives join them in their journey. But then Pandu realized he is not able to reach heaven (abode of Brahma) as he is sonless i.e. without any successor.

Men are born in this world with four debts – namely the debts due to ancestors, the celestials, the Rishis and other men. They must be discharged with virtue.

He said that there is no heaven for those, who forget to pay these debts in due time. He further states that

The celestial are paid (gratified) by sacrifices, the Rishis by study and meditation, the ancestors by begetting children and performing Shraddha at the, and the other man by humanity and kindness.

Pandu has discharged all his debts except the debt due to his ancestors i.e. having children.

So he is not able to enter into the state of eternal bliss (heaven).

Birth of Yudhishthira, Bhima and Arjuna:

Pandu remembers the curse of Rishi Kindama. Because of that curse, he is not able to have children with his wives.

Seeing him distressed, Kunti told Pandu about the boon she received from Rishi Durvasa. She told him that as per the boon, she will be able to invoke (आह्वान) any deity (celestial) by a Mantra to give her a child. 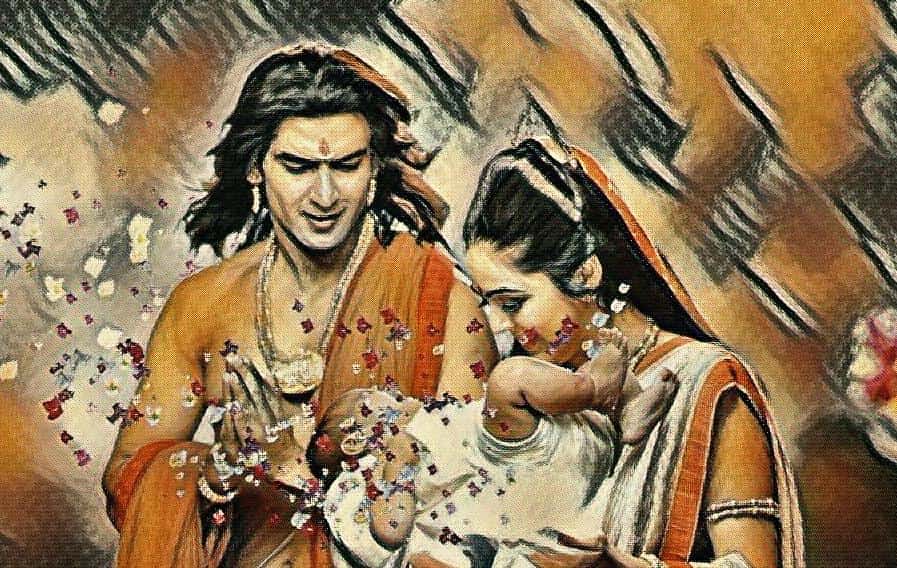 Then Pandu told her to invoke Dharma (the god of justice) first as he is the most virtuous (धार्मिक) in the world. The son we get from him will the most righteous among the Kurus and will never commit any sinful act.

(At the time when Kunti invoke Dharma, Gandhari was also pregnant for a year.)

Read More: Why Arjun wanted to kill his own brother Yudhishthira in Mahabharat?

Why Kunti cannot have more than three sons:

Thus she rejected the idea of having more sons.

Birth of Nakula and Sahadeva:

After the birth of the sons of Kunti, Madri also wanted to have her own kids. She told the same to Pandu in private and asks him to request Kunti to fulfill her desire of having sons.

Then Pandu asks Kunti to help Madri becoming a mother and says,

…Rescue this Madri as by a raft (by granting her the means of obtaining offspring), and achieve thou imperishable fame by making her a mother of children. 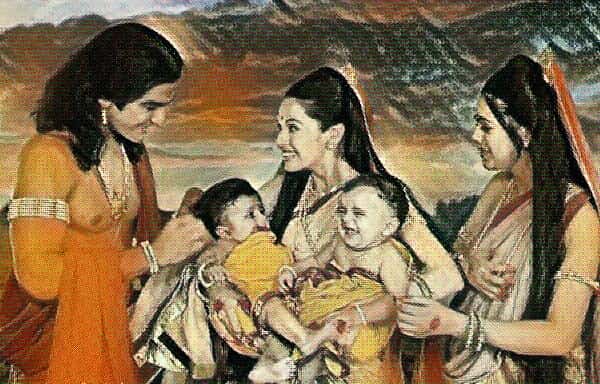 Then Kunti asks Madri to think of the celestial she wanted to get children from. Madri thinks of twin Ashwini Kumaras (doctors of gods).

From them, she received twins, Nakula and Sahadeva, both matchless in beauty on earth.

This is how Nakula and Sahadeva are born.

After some time, Pandu again requested Kunti on behalf of Madri of having more children. But this time Kunti refused this idea. She says that she has been deceived by Madri.

Because by reciting Mantra for once, she received two sons. Kunti out of fear and feeling cheated said to Pandu that,

Having given her the formula of invocation only once, she hath, O king, managed to obtain two sons. Have I not been thus deceived by her, I fear, O king, that she will soon surpass me in the number of her children. This, indeed, is the way of all wicked women.

Thus, out of fear that Madri will have more children than her, Kunti rejected the commandment (आज्ञा) of Pandu.

Read More: Why Pandavas went to Naraka & Kauravas to Swarga in Mahabharata?