Untold stories of Mahabharat – Why Arjun wanted to kill his own brother Yudhishthira in Mahabharat? How Krishna helps Arjun in killing Yudhishthira and then Arjun himself? [fruitful_sep] 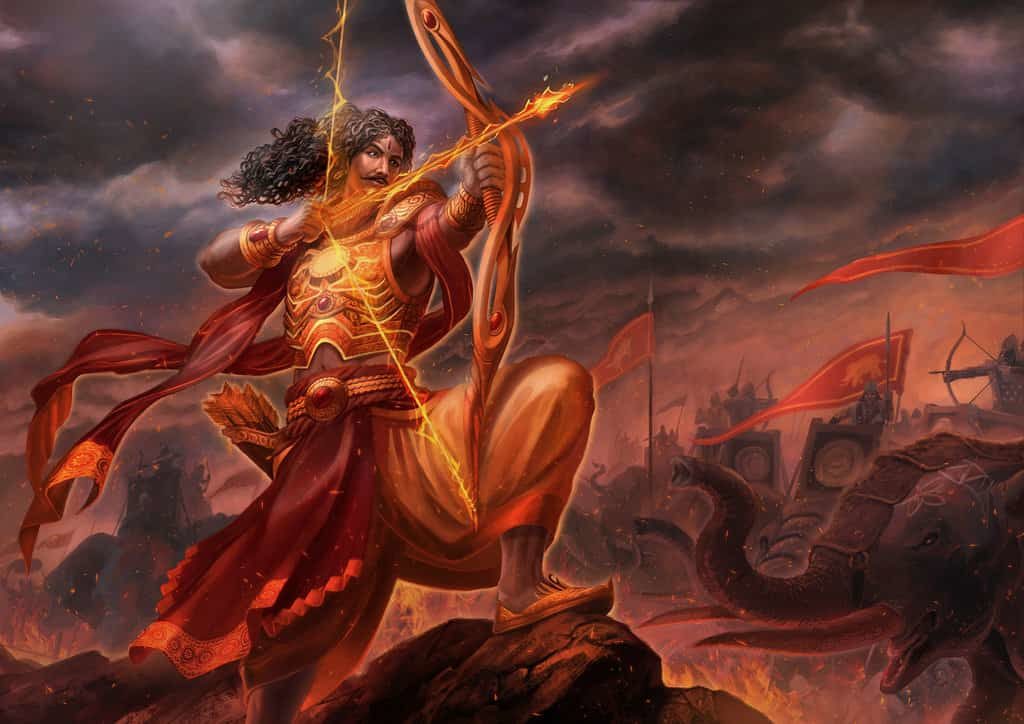 In the meantime, Sahadeva attacks Duryodhana with his celestial (आकाशीय) weapon which pierces him. This makes Karna enraged (गुस्से में आना). Now he is like an angry bull who wanted to destroy the Pandavas.

His arrows slaughtered (वध) troops of Pandavas and they began to retreat (पीछे हटना). Seeing this, Yudhishthira tries to attack but again afflicted (संतप्त) by the arrows of Karna.

Yudhishthira then orders his driver to retreat. Seeing this Kauravas including Karna starts shouting, “Seize! Seize!” and pursued Yudhishthira. 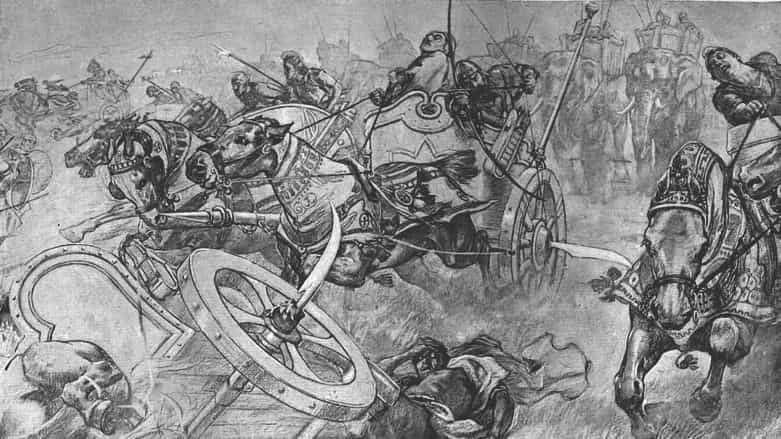 Yudhishthira, on the other hand, is in the protection of his brothers Nakula and Sahadeva. He is about to reach the Pandavas camp where he can recover.

“Him for whose sake Dhritarashtra’s son always honours thee, slay that Partha, O son of Radha. What wouldst thou gain by slaying Yudhishthira?”

That is, he questions Karna that what he would gain after killing Yudhishthira. As on the other hand Krishna, Arjun and Bhima are quickly destroying their army. Stop them first. He said that “Bhima is fighting with Duryodhana and is heavy on him. Make sure that he is not able to kill him today in front of them.”

Persuaded by his words and the fact that Duryodhana is his best friend, Karna left Yudhishthira and the two brothers. He rushed to rescue his friend Duryodhana.

[fruitful_tabs type=”accordion” width=”100%” fit=”false”]
[fruitful_tab title=”Who is Shalya?”]Shalya is the ruler of the Madra Kingdom and the brother of Madri (mother of Nakula and Sahadeva). He was tricked by Duryodhana to fight on the side of Kauravas, instead of Pandavas. [/fruitful_tab]
[/fruitful_tabs]

After successfully accompanying Yudhishthira to the camp, Nakula and Sahadeva left for the war. Now the Pandavas are heavy on the Kaurava’s army. Kaurava’s army is terrified of the attack and began to fly away.

Karna loudly shouts, “Stay, Stay!”, but nobody listens to him. Duryodhana also suggested him to retreat as this is the need of the hour.

Instead of withdrawing, Karna said,”Today I will slay all the Panchalas and the Pandavas in battle!”.

Arjun see the wrath of Karna and was terrified and said to Krishna, “I will never be able to fly away from Karna in battle!”. 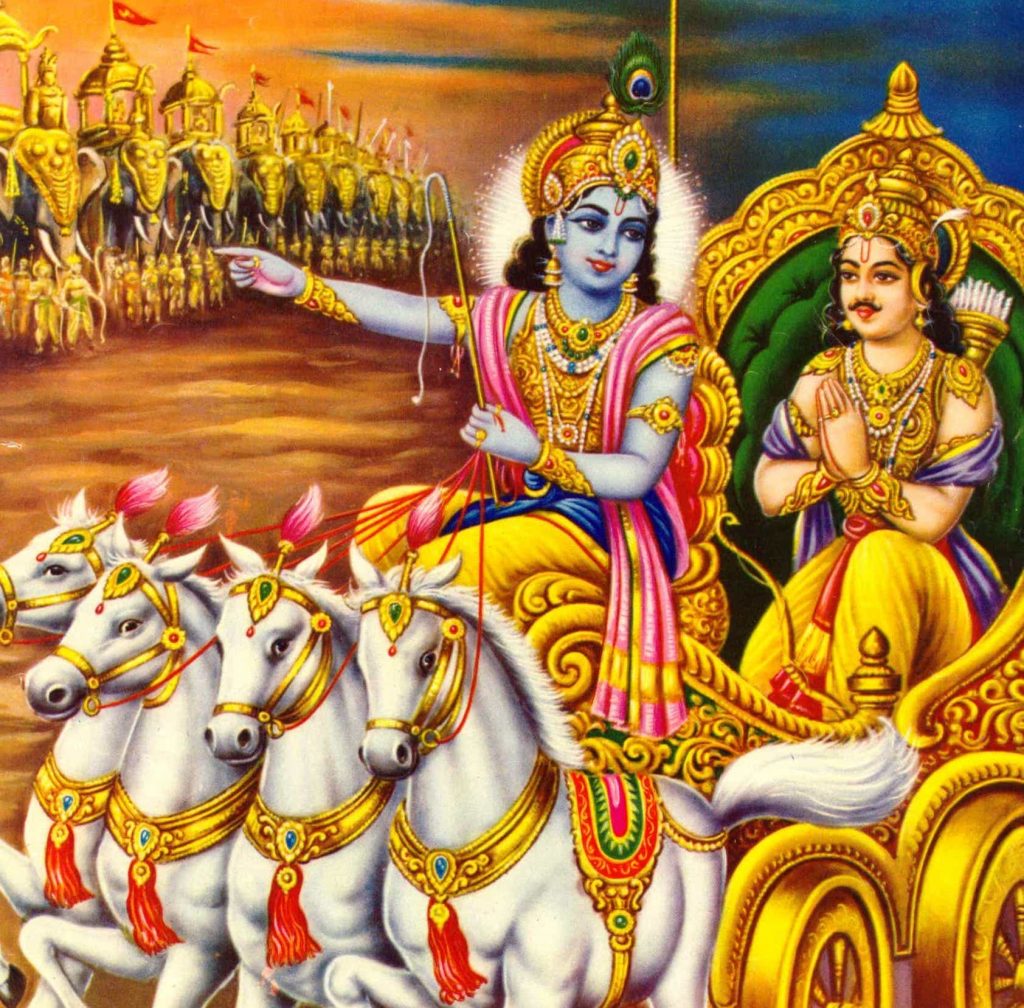 Krishna then comforted him and wanted to see Yudhishthira. He thought that Karna is overwhelmed (अभिभूत) with fatigue (थकान) for some time. Arjun also thought the same.

They quickly proceed away from the battle in their car with the desire of seeing Yudhishthira. But he was nowhere to be seen.

Not seeing his brother, Arjun approached Bhima to ask him about the whereabouts of his elder brother. Bhima told Arjun, that their elder brother is badly defeated by Karna and is taken to the camp. And it is doubtful whether he is still alive.

Arjun after hearing this said to Bhima to go to the camp and make sure that he is okay or not. But Bhima refused saying that if he goes, then his enemies (Kauravas) will say that “I am frightened in battle!”. Instead, you go and check his condition.

Then Arjun and Krishna on their car proceeded towards Yudhishthira who was lying alone on his bed. After seeing Yudhishthira alive, both of them feel relaxed and happy.

But a confusion arises in the mind of Yudhishthira. He thought that Arjun has killed Karna and that’s why he is filled with joy. Yudhishthira said,

[su_quote cite=”The Mahabharata, Book 8: Karna Parva: Section 66″ url=”http://www.sacred-texts.com/hin/m08/m08066.htm”]Welcome, O thou that hast Devaki for thy mother, and welcome to thee, O Dhananjaya (Arjun)! I see that without being wounded yourselves, you two, his foes, have slain the mighty car-warrior Karna! He was invincible in battle![/su_quote]

He continues that for the last 13 years, he is living in fear of Karna and not able to sleep comfortably on a single day.

After being defeated by him and hiding in the camp, I was thinking that how I would accomplish the destruction of Karna in the battle. But now I am delighted that you have accomplished the task successfully.

After being asked about the details of how he killed Karna, Arjun said that he has not killed Karna yet.

He continues that Kauravas troop were overwhelmed and slain by him in the battle. He said, “In the desire of seeing you, I avoided Karna who was approaching me quickly and reached hither (इधर). I will fight with him today in the battle. Come and witness the battle“.

After hearing this Yudhishthira becomes exceedingly (अत्यंत) angry with Arjun. He vents out (बाहर निकाल देना) all his anger on Arjun to the extent that he said,

[su_quote cite=”The Mahabharata, Book 8: Karna Parva: Section 68″ url=”http://www.sacred-texts.com/hin/m08/m08068.htm”]Thou hast, by entering her womb, rendered the conception of Kunti abortive. It would have been better for thee if thou hadst never been born in the womb of Kunti, or having taken thy birth there, if thou hadst come out on the fifth month an abortion than to have O prince, thus come away from the battle, O thou of wicked soul![/su_quote]

He said to Krishna that Arjun has promised all of us that he would kill Karna. Otherwise, we would then have made other suitable arrangements.

[su_quote cite=”The Mahabharata, Book 8: Karna Parva: Section 68″ url=”http://www.sacred-texts.com/hin/m08/m08068.htm”]If, O thou of wicked soul, thou hadst given this bow to Keshava and become his driver, then Keshava could have (by this time) slain the fierce Karna. If thou art unable to resist the fierce son of Radha today, as he is careering in battle, give this thy Gandiva today to some other king, that may be thy superior in (the use and knowledge of) weapons.[/su_quote] 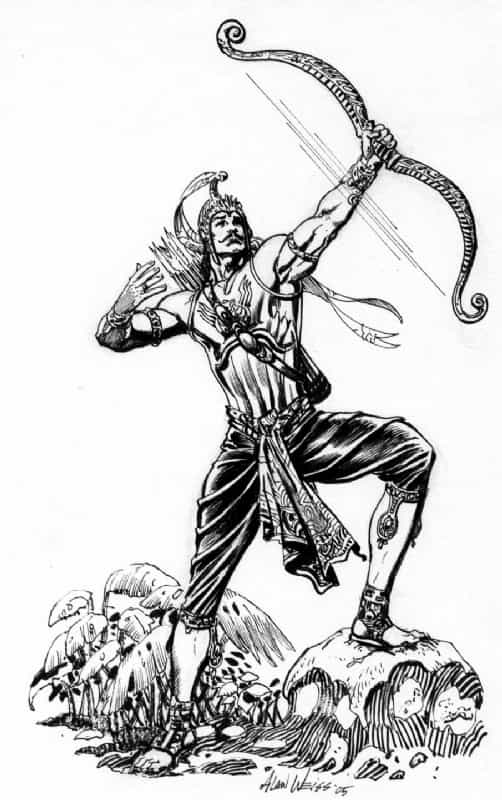 When Yudhishthira insulted him by saying that he does not deserve “Gandiva” (bow of Arjun) and that he should give his bow to some other king, Arjun becomes extremely angry. He said to Krishna,

[su_note note_color=”#fdf16b”]“I would cut off the head of that man who would tell me ‘Give thy Gandiva to another person.”[/su_note]

He told him that this is his secret vow. And since vow should never be broken, that’s why he has to kill his own elder brother. Then Krishna questions Arjun that why he is restless (बेचैन होना) of committing this sinful (पापी) act, without even understanding the extremely subtle course of morality.

Krishna said, “One who speaks the truth is righteous (न्याय परायण). And that there is nothing higher than truth”. But in some situations falsehood (झूठ) becomes utterable and truth becomes unutterable. 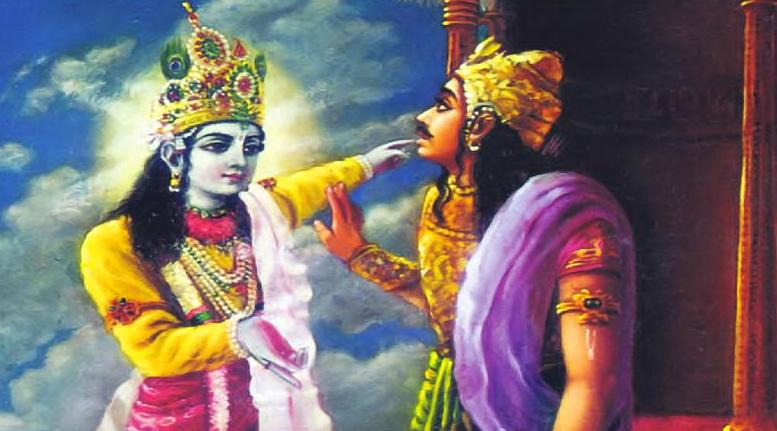 [su_quote cite=”The Mahabharata, Book 8: Karna Parva: Section 69″ url=”http://www.sacred-texts.com/hin/m08/m08069.htm”]He said, “In a situation of peril to life and in marriage, falsehood becomes utterable. In a situation involving the loss of one’s entire property, falsehood becomes utterable. On an occasion of marriage, or of enjoying a woman, or when life is in danger, or when one’s entire property is about to be taken away, or for the sake of a Brahmana, falsehood may be uttered. These five kinds of falsehood have been declared to be sinless. On these occasions falsehood would become truth and truth would become falsehood.”[/su_quote]

He told Arjun that “one must be familiar with morality in order to distinguish between truth and falsehood”. People say that scriptures indicate morality. True. But they do not provide a clear-cut solution for every case.

Then again Krishna asked Arjun about his decision of slaughtering Yudhishthira. Arjun stills sticks to his decision.

Krishna told Arjun that whatever Yudhishthira has said to you is due to the fact that he was under the grief. Also, he wanted you to kill Karna, that’s why he provoked you. Because of these reasons, Yudhishthira does not deserve death, but your vow should be kept also.

Then Krishna told Arjun that as long as a person who deserves respect, keep getting respect, one is said to be alive. However, when such a person receives disrespect, he is said to be dead though alive. 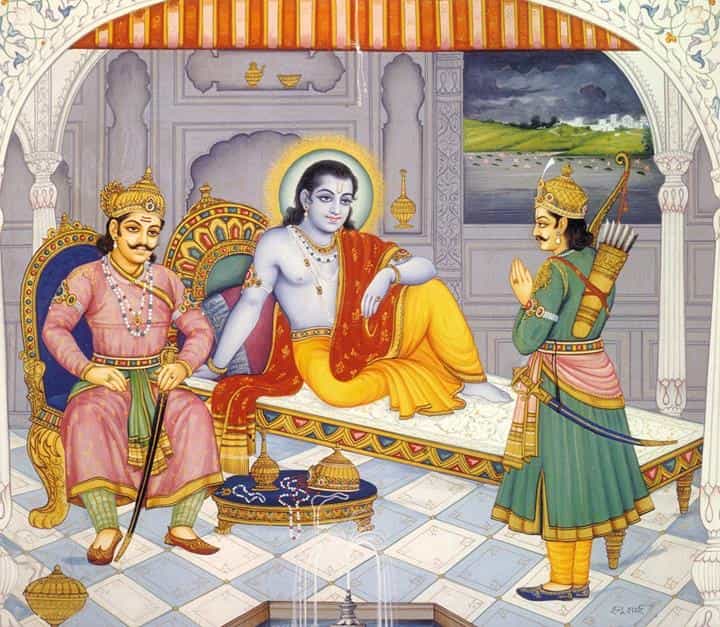 All the warriors including Kauravas have immense respect for Yudhishthira. Show him some disrespect. Address him as ‘you’ rather than ‘your honour’. When a person of such stature is addressed by ‘you’, his condition is similar to a dead person although alive.

Yudhishthira will never regard this as an offence as he is a wise man. You can later apologise for your behaviour and tell him the reason behind your offence. He will definitely understand your condition.

After insulting Yudhishthira, Arjun becomes cheerless (उदास). He felt bad as he insulted his elder brother. He again took his sword out but this time to kill himself. Arjun said,

[su_quote cite=”The Mahabharata, Book 8: Karna Parva: Section 70″ url=”http://www.sacred-texts.com/hin/m08/m08070.htm”]I shall, putting forth my strength, slay my own self by whom this wicked act hath been done. [/su_quote]

Again Krishna preaches to him saying if you destroy yourself, then you are committing an even greater sin.

Arjun kills himself without actually taking his life:

Krishna again suggested Arjun that he should boast about himself as self-praising is a sin which is equivalent to one’s own death.

Arjun starts praising himself in front of Yudhishthira as he is the greatest bowman on earth. And also that he can destroy this entire universe in a moment…

In this way, Krishna helps Arjun in killing Yudhishthira and then Arjun himself although both being alive.

[fruitful_alert type=”alert-success”]If you have something to say, then please write it down in the comment section. And also share this unheard story from Mahabharat with your friends and family members on social media (facebook, twitter, WhatsApp)[/fruitful_alert]