“The Blind Men and the Elephant” is a poem by John Godfrey Saxe which is based on an Indian Fable (कहानी) about 6 blind men and the elephant.

The Blind Men and the Elephant Story:

It is a beautiful story which tells us about the concept of partial (आंशिक) reality that we experience. This earliest parable (दृष्टांत) of this story is found in Buddhist, Jain and Hindu texts.

Once upon a time, there were 6 blind people who lived in a village. An animal named elephant has been brought to the village. One of the villagers told these six blind men that there is an elephant in the village today.

When these blind men heard this, out of curiosity, they wanted to experience it by touching it as they had no idea what an elephant is. 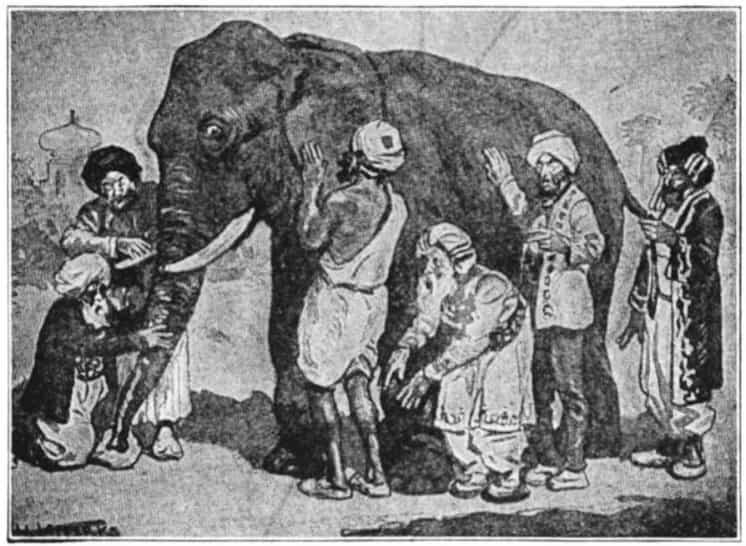 When the first person, touched the side of the elephant, he said, “It is like a wall”.

The second person when touched the tusk (गजदंत) of the elephant by touching it, he told everyone that it is strong and smooth, just like a spear (भाला).

When the third person, touched the trunk of the elephant, he said, “It is like a snake”.

But the fourth person experienced something different. He said, “It is like a tree” when he touched the feet of the elephant.

The fifth one when touched the ear of the elephant, it felt like a fan to him.

Lastly, when the sixth person touched the tail of the elephant, he said, “It is like a rope”.

Each of the six-man starts suspecting each other thinking that the remaining five are lying. They start arguing with each other.

A wise man passing by saw them. He enquires about why they are arguing with each other. They tell him what they think about the elephant. They ask him to decide who is correct among them about the description of the elephant.

The wise man said, “All of you are correct!”. They were shocked after hearing this and asks him that how it is possible that all of them are correct.

The wise man said, “Each of you has touched a different part of the elephant. That’s why you all are correct as elephant consists of all those characteristics (विशेषताएँ) that you have described.”

Moral of the Story

This story of blind men and the elephant tells us about the reality of life and also about a basic problem that we all have. It tells us that individual (व्यक्तिगत) truth may be partially (आंशिक रूप से) true but it is not the ultimate truth.

The moral of the story is that there might be some fact to what somebody says. We might not agree with it at first because we have our own reasons. But what we think might not be the absolute truth.

this story of blind men and the elephant is used to explain the concept of Anekantavada or “many-sidedness of reality” and Syādvāda or theory of conditioned predication (कथन).

It states that there are multiple aspects of truth and reality and it is not possible to explain the absolute reality with language (or words) as it can only be experienced. The language itself is not the absolute truth, but a way to express the truth.

this story of blind men and the elephant consist of four blind men. Here, they do not argue with each other but came to a conclusion that animal is the same but they have perceived (समझना) it differently. In Rigveda, it is mentioned that “Reality is one, though wise men speak of it variously”.[Source]

this story is mentioned in Buddhist scripture named, Udana in which Buddha uses this tale of blind men and the elephant to explain sectarian (कट्टरपंथी) disputes (झगडे).

He concluded the story by comparing blind men to those preachers (उपदेशक) and scholars (विद्वान) in the society who are ignorant towards other’s point of view and hold their own views as the ultimate truth. And it is because of there ignorant behaviour towards others, there are disputes in the society.

MUST READ: How to handle insult spiritually? Inspiring Story from the life of Buddha Published on 27 days ago 6 min read