Eklavya death – Why Krishna killed Eklavya? Eklavya death story or the story of Krishna killing Ekalavya. Eklavya is the cousin of Krishna. The story of Eklavya and him cutting off his bow-wielding thumb and offering it to Guru Dronacharya as ‘Guru Dakshina’ is one of the most famous stories in Mahabharata.

Eklavya was the Prince of Nishadha. He was the son of Devashrava who was the brother of Kunti and Vasudev.

But for some reasons (not specified), he was abandoned by his father in his infant stage.

He was the cousin of Lord Krishna, the Pandavas and to Shishupala.

When he was young, he was lost in the forest and was found by Vyatraj Hiranyadhanush, King of Nishadha and was adopted by him.

After his father’s death, he became the young prince of Nishadha, an alliance of jungle tribes (Adivasi) in ancient India.

Though he did not have his right thumb, he was still considered to be one of the greatest archers in Mahabharata. He is also said to be a great friend of Duryodhana.

The supporter of Jarasandha:

Ekalavya and his clan, from the times of Nishada Vyatraja Hiranyadhanus, were great supporters of Jarasandha.

Jarasandha was the arch-enemy of Krishna, which made Ekalavya his enemy too, in spite of the fact that they were cousins.

He worked as an archer of King Jarasandha. When Jarasandha planned an attack on Mathura, he was aided by him.

Rukmini was the daughter of Bhishmaka, the king of Vidarbha. He was the vassal of King Jarasandha of Magadha.

Rukmi does not want to earn the wrath of emperor Jarasandha, who was the arch-enemy of Krishna. Instead, he wanted her to marry his friend Shishupala, the crown prince of Chedi, who was also the close associate of Jarasandha.

Rukmini learned this and was horrified and immediately send the message to Krishna. She asked Krishna to come to Vidharbha and kidnap her to avoid a battle where her relatives may be killed.

Now there are many versions of the story of how Krishna killed Eklavya.

According to some, Eklavya helped Jarasandha and Shishupala by chasing Rukmini while she eloped with Krishna. Enraged, Krishna picked up a stone and hurled it at Eklavya, killing him. 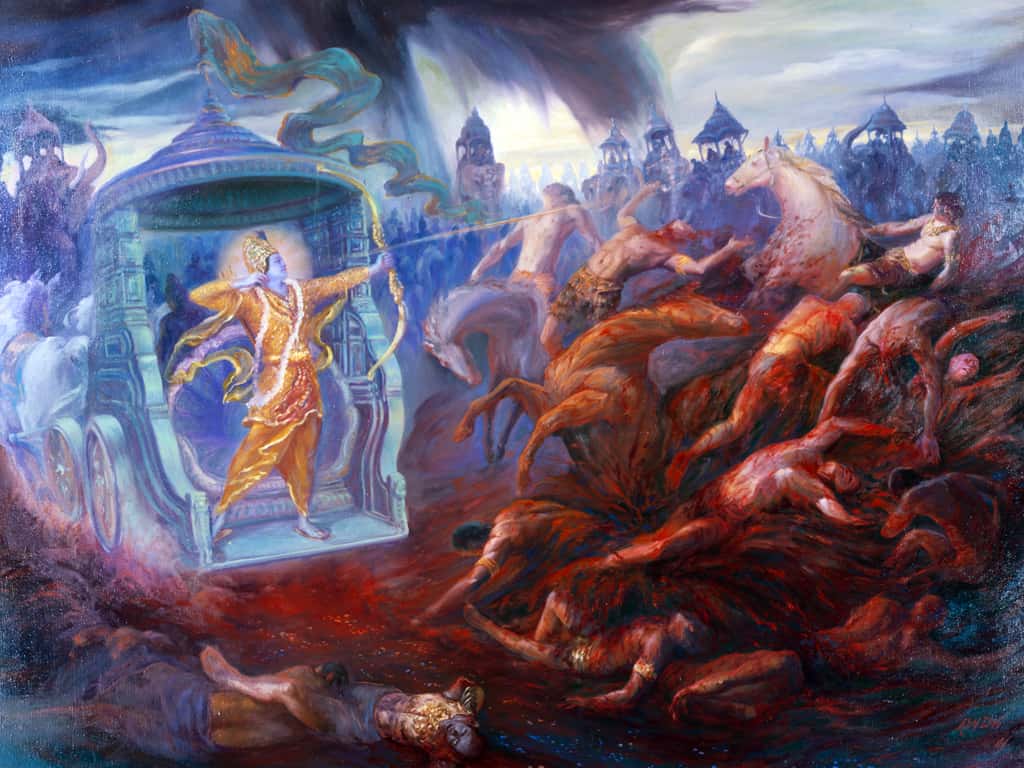 During Yudhisthira’s Rajasuya Yaga, Jarasandha was killed by Bhima by the support of Lord Krishna.

Agitated on the death of his friend and king, Eklavya coveted to take avenge by killing Krishna and every single Yadava in Dwaraka.

During the attack on Dwarka, he was killed by Krishna.

But some believe that he survived in this battle against Yadavas and somehow reached the court of Duryodhana and was greeted by him.

Duryodhana made him the king of all forests in Hastinapura. So under the order of Duryodhana, Eklavya tried to kill Samba, son of Krishna. Then Krishna broke his skull from a rock and kills him.

Krishna gave a boon to Eklavya:

It is also believed that Krishna gave him a boon at his death that he would be reborn to kill Dronacharya. Accordingly, he was born as Drishtadyumna and finally killed Dronacharya.

In Drona-Parva, Krishna reveals that he let people like Jarasandha, Shishupala and Eklavya be killed.

He told that if they were not killed, later on during the war, they would have taken the side of Kauravas and that would have obstructed the establishment of Dharma.

MUST READ: Krishna Death – How Krishna died in Mahabharata?